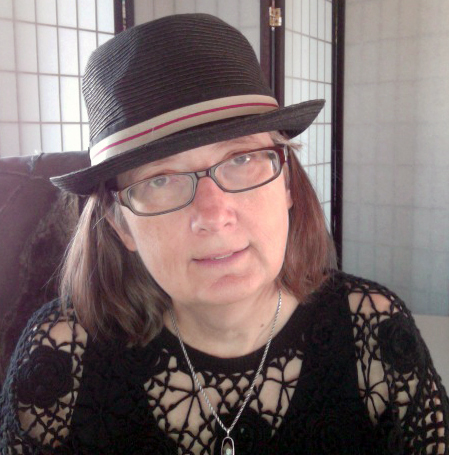 Denise Weaver Ross is an artist, poet and graphic designer who lives and works in Albuquerque, NM. After graduating from the University of Massachusetts, Amherst in 1982 with a Master of Fine Arts in Printmaking, she fell into the personal computer revolution when she was hired by a firm across the street from MIT owned by a  MIT professor. Sitting in front of the the first Mac, she was asked to draw a mouse sitting at a computer. From there she learned all the emerging digital arts programs from the beta version on up including  Adobe Photoshop, Adobe Pagemaker which eventually became InDesign, and Macromedia’s Freehand which evolved into today’s Adobe illustrator. She also developed graphic user interfaces on the Macintosh using a early Web-like programming tool called Hypercard which evolved into HTML. She also worked as a network administrator and database developer.

Fast forward she moved to Albuquerque in 1996 and began a design business. Soon her clients included Sun Healthcare, Sandia Area Federal Credit Union, Futures for Children, and Carrie Tingley Hospital Foundation to name a few. She also worked with Lovelace Healthcare and Albuquerque Heath Partners up until the recession when she took a full time sales position at Zia Graphics. After leaving Zia Graphics she focused more and more on web design and built websites for Tortuga Gallery, The Source, Acupuncturists Without Borders, and many individual artists. Along the way she taught Digital Arts classes and CNM and currently teaches digital arts and web design classes at UNM continuing education.

A lifelong fine artist and poet, she recently completed her fifth book of art and poetry and has exhibited in galleries and museums along the East Coast, Chicago, Santa Fe and Albuquerque.